Speaking of Aqua Unit Patrol Squad 1, I just have a couple of questions I’m dying to ask.  Why the relaunch?  For me, it’s worth it for the new theme music alone, but what caused the title change?  Are you carrying the gag from “One Hundred” over into the real world? 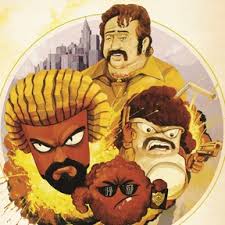 shows on the network.  We thought a new title would curb the viewing audience but we discovered that our ratings were more enormous than ever.  As for the music, we reached out Josh Homme, who had done a voice on the show in the past, and he was game for creating a new theme.  We gave him the vibe of the new direction; 70’s style cop show and he turned in absolute gold.  For the end credit theme, we did a remix of his original instrumental stems from the open and I plugged in a Steinberger and shredded over the music.  Michael Kohler made the end-theme remix, he’s the genius sound designer behind all the shows and the movie.  We have to now change the title of the show each season.  What was the question?