Notes from the Waterfront Film Festival – Bound by Flesh, Between Us, and Blackfish Mad Men Roundtable–“The Quality of Mercy”

In Day 2 of our coverage of the 15th Annual Waterfront Film Festival, we’ve got more reviews.  Today, it’s Teddy Bears, Twenty Million People, and Syrup.  And remember, if you’re anywhere near West Michigan, they always need volunteers to put out an amazing film festival year after year.  Check out their website and help out!  And next year, we can totally hang out.  But don’t let that dissuade you.

Teddy Bears – So, it’s always tough to pick which movies to see at the festival because time is limited and everything looks good in the program.  One thing that wins me over right away is seeing people from my favorite shows in the cast list, so when I see Community’s Gillian Jacobs in the program listing, I’m already sold. In fact, most of the main cast is primarily known for TV — there’s Happy Endings‘ Zachary Knighton, David Krumholtz, Melanie Lynskey, Jason Ritter, and in smaller roles, French Stewart and Dale “Patty the Daytime Hooker” Dickey.

Getting beyond the cast, the movie’s about Andrew (Krumholtz), a man who recently lost his mother to cancer.  Spending a week in the desert 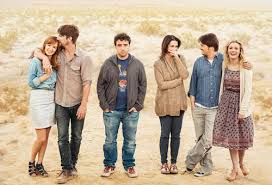 with his best friends, he announces that the one thing that will make him feel better is if all of his female friends will sleep with him.  At once.  Reactions are decidedly mixed.  The guys in the group would prefer that he not sleep with their girlfriends, the women are either dismissive or strangely curious.  And even when the request doesn’t come up for a while, it colors all of their interactions.  In fact, it eventually seems like it actually would help Andrew, even if it won’t do much for the group at large.

Krumholtz is great at playing a broken man – there’s an excellent scene where he bonds with a stray dog, and it’s clear that this dog means more to him than anything but all he can do is insult the dog in a nice voice.  It’s a little creepy and really heartbreaking.  That said, there’s also a really funny bit where the guys have a rock fight, which is the perfect activity for guys who are a little dumb.  (Plus, there’s a laugh out loud scene with a couple of prostitutes.)

Despite a couple of deeply upsetting scenes, ultimately Teddy Bears (named for a type of cactus) has a positive conclusion for most of the characters.  I had lots of fun watching it, and it was the first non-depressing film I saw at the festival.

Twenty Million People – Twenty Million People is a self-aware romantic comedy.  The lead character, Brian (played by writer/director Michael Farrell), hates romantic comedies.  And then he meets a stand-up comedian, Ashley, and despite both of their assertions that it’s just a casual thing, Brian ends up more involved than he thought possible.  So when Ashley disappears without a word, Brian goes a little nuts and starts getting advice from romantic comedy characters that only he can see.

It’s eminently likeable and relatable.  We all know how it feels when you’re not getting a response to a voicemail or text and there’s this temptation to just keep trying, even though if they’re not responding to you there’s probably a reason.  It’s that balance between not giving up and not being creepy.  Brian comes nicely unhinged and his life goes into a downward spiral.  We’ve all been there.

The neat thing, and it’s something I’ve never thought about before, is that formula romantic comedies work mostly because they are cast with famous people.  When your stars are, say, Amy Adams and Ryan Reynolds, half the work is done for you.  Of course they’ll end up together because they are the only people in that world who are good enough for one another.  But when you’re not familiar with the actors, there’s actually a question as to whether it’s going to work out.  It seems completely reasonable that Brian will never find Ashley again and that’ll be the end of it.  Things don’t always work out for those of us who aren’t played by big-name actors.

It’s fun and funny, and the romantic comedy gimmick is used sparingly enough that it doesn’t wear out its welcome.  I enjoyed it quite a bit, even if I died inside when Brian tried stand-up comedy and he was reading his jokes off of notecards and nobody was laughing.  That is rough.

Syrup – I read Maxx Barry’s Syrup a few years ago and really liked it, even if couldn’t get past the fact that one of the satirical targets in the novel is people in advertising who change their names to something cool (like Six or Scat or Sneaky Pete) and the book was written by a guy who added an extra “x” to his first name.  (He’s removed it since then.)  It tells the story of a wannabe ad guy (Scat, played by Shiloh Fernandez of the recent Evil Dead remake) who comes up with an energy drink called “FUKK”.  Corporate backstabbing gets the better of him, though, and he ends up trying to outthink his rivals with increasingly over-the-top campaigns, one of which may or may not have led to the death of a high school student.

He’s also trying to get romantically involved with Six (Amber Heard), the beautiful ad executive who probably just loves him for his ideas except when she hates him for everything about him.  Fernandez and Heard have great chemistry, but she can also sell quiet contempt like nobody’s business.  (Director Aram Rappaport said at the Q&A that Heard was basically playing herself, to the extent that they considered an ending where Six reveals that her real name is “Amber Heard”.)  The story is solid, and I think the emotional arc works better than in the novel, which got a little bogged down in plot.  (There’s a whole bit about a movie that exists only as a soda commercial that takes up a big chunk of the book and is excised from the movie completely.)  It might be that the actors are selling it, but it really feels like Rappaport found a heart that wasn’t entirely present in the book.

The presentation style is pleasantly weird, with the characters occasionally talking directly to the camera to explain advertising principles.  There are some great, funny supporting cast performances from people like Brittany Snow and Delocated’s Steve Cirbus (though it’s jarring to hear him without a Russian accent).  Tonally, it gets surprisingly serious in the third act, but the characters are developed enough that the shift works.  You’re invested in Scat and Six despite the fact that they’re sort of terrible people.

Syrup feels like it could be a major release.  It looks like it cost more than its meager budget and boasts some surprisingly big names in the cast.  And even though the original novel is a few years old now, Rappaport’s screenplay updates it nicely and keeps it up to the minute.  It’s very funny and absorbing, and winningly filthy.

Tomorrow, we’ll wrap up coverage with a look at the crime drama Crave and the dead-husband comedy White Reindeer.