During the mid-season break, I finally started watching The Walking Dead.  And now that I’m all caught up, it means I can get into the best-reviewed videogame of 2012, which also happens to be The Walking Dead by Telltale Games.  Yes, I’m a little behind the curve on this one.

It’s worth noting that the game is technically based on the comic book version, not that this is especially important.  It’s a group of people in Georgia dealing with the zombie apocalypse in a stand-alone story.  But the logo comes from the comic and the graphics are clearly based on Dead artist Charlie Adlard’s style.  And most notably, when established characters show up early on, they’re the comic versions.  Comic Glenn and TV Glenn match up right down to the wardrobe, but it’s jarring when you visit Hershel’s farm.  Hershel is not the quiet, dignified man of faith that we love on TV.  He’s an angry and profane guy who spends most of his screen time yelling at you.  But that said, it really doesn’t matter.  Hershel and Glenn drop out early on, and from there it’s all new characters living in a world that’s consistent with both versions of Dead.

The game itself, like most of Telltale’s fare, is an update on the old point-and-click adventure games.  It’s a spiritual descendant of King’s Quest or Maniac Mansion (Or, Zak McCracken and the Alien Mindbenders, but I’m pretty sure my sister and I are the only ones who remember that game.)  Your character interacts with objects and talks to people, rather than shooting wave after wave of walkers.  (There’s a game from another developer where you do exactly that, and it is apparently not very good.)

I realize that “interacting and talking” doesn’t exactly seem like exciting gameplay, but the execution is amazing.  You play as Lee Everett, a man who’s on his way to prison when we first meet him.  Dropped into the character, you don’t immediately know what Lee’s crime was or whether he’s even guilty.  The chatty police escort seems to think he’s innocent, but that’s all you have.  For the first several minutes, the only thing you can do is look around and choose responses to the cop’s conversational questions.  And then all hell breaks loose and you’re climbing out of a car wreck with a broken leg, still handcuffed, and facing a walker.

The controls are simple and intuitive.  When Lee looks at an item, a list of options appear, graphically mapped to a controller button.  I know that doesn’t seem to make sense, but when you’re looking at something, it’s immediately clear which button you press to make things happen.  It’s one of the most accessible games I’ve ever seen – perfect for a non-gamer who really likes Walking Dead.  And even when the game requires a quick reaction (like grabbing a gun from an assailant or kicking an advancing walker), it’s forgiving enough that twitch reflexes won’t stand between the player and the story.

As for the story, well, it’s an easy fit in the world of Walking Dead.  Lee wanders through a desolated neighborhood, finally finding a young 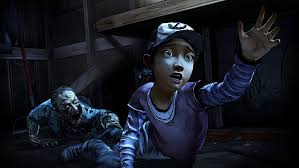 girl named Clementine who still thinks her parents are coming back.  They run into other survivors, try to find safety, turn on each other, encounter tragedy, fight off walkers… It’s well-trod ground that will be familiar to any viewers and/or readers.

As for the storytelling, well, let me diverge for just a little bit.  And consider this a SPOILER WARNING for Season Three of the TV show.  I really had problems with Andrea’s arc throughout that season; it seemed like she was tortured for sixteen episodes and then died and it didn’t matter.  It was too nihilistic for my tastes, and I couldn’t really connect with that.  To me, the message of Andrea’s story and the season as a whole was “Why bother?”  I walked away from that season feeling that the show wanted me to think that Rick and the others were stupid for even trying to survive.

I was deeply uncomfortable with that.  As a contrast, it’s been several years, and not only does the tenth issue of All-Star Superman make me cry, I will tear up if I attempt to explain the story.  (Ask me to do it at a party!  It works every time!)  Just to keep it brief, All-Star Superman is a series about a Superman who knows he’s going to die soon.  In issue ten, he makes the rounds and tries to fix as many things as he can before he dies, making arrangements to see that Earth would be safe, curing diseases, just making the world better.  And because he’s Superman, he also has to fight a giant robot.  As he spends a couple of panels handily winning the fight, he hears everything that everybody in the assembled crowd says – shouts of support, phone calls, everything.  In the thicket of dialogue balloons, there’s one where somebody’s calling “Regan” to tell her that he’ll be late for their appointment.  It seems inconsequential, really.

On the next page, there’s a scared, sad teenage girl standing on the ledge of one of Metropolis’ ludicrously tall skyscrapers.  It’s Regan, and the man in the crowd was her psychiatrist.  As she prepares to jump, Superman shows up – in all the chaos, he picked up on that one snippet of dialogue and put everything on hold.  Superman, who knows that he himself has only days to live, tells her, “It’s never as bad as it seems.  You’re so much stronger than you think you are.  Trust me.”  And then he just holds her.  It’s a perfect moment, and I’m fighting back tears even writing about it.

We’ll get back to Walking Dead, I promise.

He takes a moment from fixing the entire world to change one person’s life.  This is why I’ll always love Superman.  This sequence actually has an ongoing effect on how I live my life, and it couldn’t be farther from what I took from the third season of Walking Dead.  It made me angry at the show and I was ready to stop watching.  But I discussed that finale with a friend  (And I forgot to ask permission to quote or identify them, so I’ll just leave them unnamed.  Mysterious!) who convinced me I was watching it wrong.  Said friend made the point that Andrea’s arc was about the fact that she tried.  She spent all season trying to help, to make things better, right up until the very end.  And it was futile, but she didn’t give up.  Her last words are “I tried”, and to the extent that there’s any victory for her, it’s that she never stopped trying.  The show’s point wasn’t that she was stupid to try; it’s that she didn’t give up no matter how bad things got.    Once I got my head around that, it put the whole series in a different light for me and suddenly it worked.

And the game (which is what we were talking about an hour ago) embraces this ethos.  It’s relentlessly bleak, but because Lee feels responsible for Clementine, we have a reason to care.  He’s not a guy who can save the world or even stop it from getting worse, but he can make sure that one little girl is protected.  It makes the game emotionally engaging in a way that most entries in the survival horror genre can’t match.

And here’s what really makes the game stand out – your choices matter.  You get to pick your dialogue from a list of options, and if you choose to lie to somebody or evade their questions, they notice and it affects your relationship going forward.  It’s something that the BioWare games have done for years, but this is actually more sophisticated.  I love the Mass Effect series so much, but the dialogue options are a more or less binary system.  Renegade or Paragon.  And most of the action choices function the same way.  If you save the Rachni instead of exterminating them, they come back two games later to help fight the reapers.  But you don’t have to keep dealing with the ongoing ramifications of that choice.  It doesn’t affect the way everybody in the game feels about you.

And that’s not a criticism of Mass Effect.  In that series, player choice is one element of the game.  In Walking Dead, it’s the main point.  When your companions argue, taking sides with one of them hurts your relationship with the other.  Trying to mediate makes both of them think you’re weak.  This affects the gameplay.  They treat you differently based on your decisions.  And that’s just the small stuff.  Sometimes you have to decide which four of the ten people holed up in your compound get food.  When two people are under attack, Lee has to pick which of them to save.  The other one dies and that changes the course of the game.  These aren’t cosmetic changes – after Chapter One, your group either includes Doug the awkward tech nerd or Carley the pistol-wielding reporter.  You can’t get better at the game and save them both; you’re forced to let one of them die.  And unlike Mass Effect where you can take your sweet time picking a course of action or a dialogue option, every choice in Walking Dead is on a timer.  Sometimes you have a few seconds to mull over your decision, but the major choices usually require an immediate instinctual reaction.

You can’t make a perfect choice.  Everything that you and Lee do has ramifications and forces you to wonder if you did the right thing.  I hated having to let people die and I felt terrible when I had Lee kill a cannibal farmer who threatened the group.  It made sense at the time, but Lee (and I) didn’t know that Clementine was watching and that she’d be terrified.  That feeling affected the way I made similar decisions from there on out.  The way the game made me want to take care of this little girl is just so impressive.  It’s really excellent, and it gave me a new appreciation for Andrea’s arc on the show.  Like Andrea, Lee is doing the best he can against impossible odds, when success is defined in the short-term.  They weren’t failures because they couldn’t save the day; they’re heroes for still trying right up until the end.

You don’t have to know anything about The Walking Dead to play the game.  And you really don’t have to know much about video games – the controls are clear and simple, and the checkpoints are generous.  If you get Lee killed, you’ll start up again shortly before the moment that killed you.  So if you didn’t scramble to safety quickly enough the first time, you get to take another crack at it right away.  The level of difficulty won’t keep you from experiencing the story.  It’s a unique and rewarding experience, one that doesn’t go away when you finish the game.

For reference, I bought the Game of the Year edition (officially titled The Walking Dead: The Complete First Season) on disc for Xbox 360, but it’s also available for download on Xbox Live, PSN, or even as an iPad game on iTunes.  The beginning of the second season, which you’ve probably seen advertised during the show, is also available for download.   The people who named this the best game of the year in 2012 were right.  If only I could send them this message from the future…