Happy Valentine’s Day!  Since it’s the traditional day of love, we are (or course) thinking about TV.  Specifically, our favorite current TV couples.  There are some pairings that just delight us to no end, whether they’re supervillains, displaced fairy tale characters, or city government employees.  And so, we’re celebrating the holiday with a list of our favorite couples.

Bob and Linda Belcher (Bob’s Burgers) – So many marriages in TV comedies present one long-suffering partner who’s learned to deal with their spouse’s wackiness. Or there’s a fun partner paired up with a killjoy. But the Belchers avoid those clichés – Bob and Linda both have their quirks, but neither of them loves the other in spite of those things. They’re each in love with the whole package. Whether it’s Linda’s impromptu singing or Bob’s strictly regimented bowel movements, these two never roll their eyes at what they married into. Even though they’ve found a comfortable routine, they’re clearly nuts about one another. You know how so many shows do an episode where maybe the husband is tempted by a sexy new lady at work, and even though you know that they’d never follow through, the show still tries to make it dramatic? They could never do that story on Bob’s Burgers, because it’s not the least bit believable that either Bob or Linda would ever consider cheating. Even if they’re not the most exciting couple out there, they’re totally in love and they make us happy every time.

when Ryan came into her life, courtesy of her grandfather Zeke. They met when Zeke brought Ryan along to her new cousin Victor’s baseball game and both seemed almost instantly smitten. Even though he was clearly damaged by his time at war, Amber was compelled to love and care for him. Their connection was electric. When Ryan lost his job on Joel’s construction site and went on a bender, Amber made the strong decision to take a break, even if it meant losing Ryan forever. She’d seen her parents’ co-dependent relationship and didn’t want to take the same road. But Ryan realized what he’d lost and decided he needed to win Amber back, which he did proving himself to Joel and then to Amber once again. We think that if Parenthood is granted another season, this couple’s wedding will be part of it.

The Monarch and Dr. Mrs. The Monarch (The Venture Bros.) – The first couple of super-villainy, the Monarchs have a

more fully-developed relationship than most TV couples who don’t wear butterfly costumes. I think I like them so much because so much work went into building their relationship. When the series began (and she was Dr. Girlfriend), the Monarch clearly adored her, but he was a terrible boyfriend. He kept putting his arch-villainy ahead of their relationship and even tasked Dr. Girlfriend with seducing his enemies so he could turn them into caterpillars. (Don’t ask.) But when she left him for Phantom Limb, the Monarch went into a bit of a downward spiral, and the two of them ended up really having to work on their relationship. He promised to give up hating Dr. Venture, which was his favorite thing in the world, and he followed through on his promise. But when Dr. Mrs. The Monarch realized he wasn’t happy without that hate in his life, they compromised – yes, they live in a battle cocoon, but they still have an adult relationship and talk things out. And these days, they’ve got it figured out – they have a healthy marriage and they keep it interesting with experimentation (“We’re villains! We swing!”). We love these crazy kids!

Jane. They’re two people who could really only be happy with one another. Jane’s hypercompetitive nature and Brad’s assortment of obsessions would put most people off, but it works for them. Brad and Jane are so in sync that they sort of have their own language, and they can bond over things like micromanaging vacation preparation. We love the way they’re willing to indulge one another’s strangest inclinations – if Brad wants to crawl across a mousetrap covered floor to feel alive, well, Jane is totally OK with that. And we’re also totally in favor of their lack of regard for traditional gender roles. They’re pretty great!

Cameron and Mitchell Tucker-Pritchett (Modern Family) – It’s refreshing to have a gay couple on TV that doesn’t have to serve as a stand-in for all gay couples everywhere. Granted, TV’s got a long way to go in that respect, but Cam and Mitch have

always been characters and not symbols. They’re not idealized – they have just as many ups and downs in their relationship as Phil and Claire or Gloria and Jay. But they’re sweet guys and great fathers, and they’re two of the most consistently funny characters on TV. (Anytime Cam invokes growing up on a farm, it will be great.) We saw their pain as they tried and failed to adopt a second child last seasons, and now they’re dealing with Lily’s questions about her birth mother as she gets older. They’ve dealt with family issues we haven’t really seen on network TV before (Like Lily having a play wedding to Mitchell, only to make Cam jealous: “Please do not turn me marrying my daughter into something ugly.”) And unlike so many married couples on TV, they actually have outside friends, both individually and as a couple. That’s a nice change of pace, and makes for some fun plots. If Will and Grace, as it’s often credited, helped America get more comfortable with gay people, Mitch and Cam just may do the same for gay couples.

Rayna James and Deacon Claybourne (Nashville)–OK, so technically they’re not a couple right now, but they are the loves of each other’s lives. It’s too bad that Deacon’s rehab took five times to click, or they might still be together. We’re pretty sure

Deacon is the father of Rayna’s oldest child, though it’s not been officially confirmed. And their chemistry is off the charts hot. Deacon is struggling through another tough time personally, but not by turning to liquor or pills to ease the pain, so we think that’s already a good sign. And Rayna is on the verge of a divorce from Teddy, her newly minted mayor husband, who has already moved on with Peggy. Rayna and Deacon shared a steamy kiss in the elevator last week and they know each other better than anyone else in their lives. Isn’t it only matter of time before these soulmates work it out for good?

Amy Pond and Rory Williams (Doctor Who) – This one’s a bit of a cheat, since they’re not on the show anymore. But when 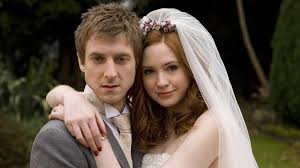 you’re as awesome as Amy and Rory, we bend the rules for you. On a series like Who, with all of its sci-fi trappings, there’s a built-in advantage to any couple. Any show can have a character say that they’ll wait 2000 years for their wife, but on Doctor Who, this actually happens! You can actually have a love that transcends time and space because that’s what they do! (This is probably part of why Twilight is so popular, but we’ll take sonic screwdrivers over mopey sparkly vampires any day.) While Amy began her companion stint as a bit of a runaway bride, she soon brought Rory into the fold. They are, to begin with, a completely adorable couple. And it seems like Rory is dating well above his level, but when you get to know him and realize what a great guy he is, it’s clear that they’re lucky to have one another. Here’s how great they are as a couple – when Amy was sealed inside the Pandorica, Rory stood by her side and protected her for two thousand years. (Technically, it was a synthetic duplicate of Rory, since the real one had been erased from history, but now real Rory remembers that entire time as if he lived it. But still.) That is beautiful! And when either of them is in trouble, the other will tear a hole in the timestream to save them. In fact, Amy sacrificed herself to the Weeping Angels just so she could live out her life with her timelost husband. We cried like babies, and we miss them every day.

Snow White and Prince Charming (Once Upon A Time)–How can you not love one of the most cherished couple of all time? 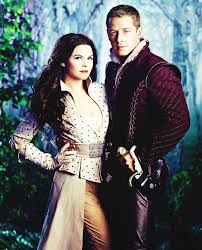 Brought back to prominence in the town of Storybrooke, Maine, this couple has been through every conceivable obstacle in life. They’ve defeated evil on many occasions (sometimes in fiery dreamscapes even!), just recently reunited with the 28 year old daughter they had to send away through a magic portal, and battled dragons and ogres to be together. Now, they really just need to find a house with actual bedrooms so they can do it without their grandson accidently walking in. Is that so much to ask?

Leslie Knope and Ben Wyatt (Parks and Recreation) – Possibly our favorite TV couple, Leslie and Ben could not be more perfect for one another. We’ve loved every step of their relationship – Ben’s quiet admiration in “Flu Season”, the two of them desperately trying to hold back their feelings because of stupid rules, their secret relationship that jeopardizes Little Sebastian’s memorial service, Ben giving up his job for Leslie, and an absolutely perfect proposal. Amy Poehler and Adam Scott are so great, and it really feels 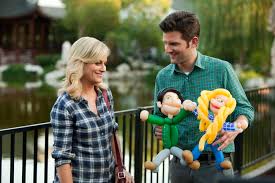 like we’re watching two people fall in love. And as a couple, they put the last nail in the coffin of the old “if they get together, it ruins the show” complaint. (Look, Moonlighting and Cheers both saw noticeable decreases in quality after the leads hooked up, but not because they got together. Moonlighting had so much behind-the-scenes drama, and Sam and Diane were a terrible couple. Deal with it.) Instead, their relationship has made an already great show even better.

They just work on every level – they’re a great comedy team, their personalities are perfectly matched (How many other couples name sex moves after Supreme Court justices?), and they seem just ridiculously attracted to one another. We totally buy that they’re this close to just hardcore making out in the back of a cab at any given point. They’re our favorite TV couple, and we expect to weep tears of joy at their wedding. And we already know they’re not going to go with some worn-out “cold feet” story for the wedding episode. Leslie and Ben are here to remind us that healthy and happy relationships are so much more entertaining than fake obstacles and changes of heart.
Let us know about your favorites in the comments!  And yes, we’re counting on Becky and Adam from Degrassi coming up.

One Response to Our Favorite TV Couples