Guys?  We love podcasts almost as much as we love television.  And we talk about our favorite podcasts every chance we get, but once they’ve been running a few years it can be hard for the new listener to catch up.  “Why are Garry Marshall and Gillian Jacobs married?”  “Why is Jason keeping track of which things June knows about?”  “Wait a minute… a cowboy and a Martian are having a baby?  These are the sorts of questions you might reasonably ask.  And so, in our new feature we’re going to give you the best entry points for our favorite podcasts.

This week, we’re looking at The Thrilling Adventure Hour.  To put it simply, it’s a stage show presented in the style of old-time radio plays.  Every month, writers Ben Acker and Ben Blacker and the Work Juice Players perform a live show at Largo in L.A.  It opens with an installment of Sparks Nevada, Marshal on Mars and closes with Beyond Belief.  The rotating middle segment is one of several different features (or occasionally a Sparks spinoff).  And then the show comes out as a weekly podcast with one segment per week.  It’s hilarious and addictive and everybody that you like has been on it.  But with more than 160 episodes, it can be hard to know where to begin.  And so, here are my picks for the ten Thrilling Adventure Hour episodes that you need to hear.  All episodes are available on iTunes and on the Nerdist website.  And maybe other places, but you’ve already got iTunes installed.  Why reinvent the wheel, you know?

Episode 2 – Sparks Nevada, Marshal on Mars – “Inside Out in Outer Space”

That’s right, with Sparks, you want to start at the beginning.  Unlike the other segments, it has a consistent continuity with one lengthy story usually feeding straight into the next.  In all honesty, you can probably catch up fairly quickly if you start in the middle but it’s more fun if you know who the characters are and have some idea of their history.  So start at the beginning with Sparks and his faithful Martian companion Croach the Tracker.  (Marc Evan Jackson and Mark Gagliardi.)  And until I gave it another listen, I forgot how many guest-stars this segment has.  Scott Aukerman, Nick Kroll, Aubrey Plaza…  It’s star-studded!  I love the whole Thrilling Adventure Hour, but I love Sparks Nevada most of all.

Episode 23 – Down in Moonshine Holler – “The Lottery”

Moonshine Holler doesn’t appear nearly often enough for my tastes, but it’s great.  It’s the story of a millionaire who gave it all away to find his one true love, the Hobo Princess.  Craig Cackowski plays the millionaire, rechristened Banjo Bindlestuff, and Hal Lublin plays his hobo mentor, Gummy.  It is an unending delight, and this episode combines Stone Soup and a certain Shirley Jackson story brilliantly.  Special guests include LakeBell and Nick Offerman, and there is almost nothing funnier than Hal’s Gummy voice.  Apple Pie!

Beyond Belief is a reimagining of Nick and Nora Charles as alcoholics who commune with the supernatural.  Paul F. Tompkins and Paget

Brewster play Frank and Sadie Doyle, and it was the PFT factor that got me into the show.  When he says he’s on a podcast, I stop what I’m doing and listen to it!  Most of these episodes are standalones, though there’s a running subplot about an evil clown and some returning characters.  Still, you can jump into any episode of Beyond Belief and get what’s going on.  It’s consistently hilarious, but I picked this episode because it was my first Thrilling Adventure episode.  A bunch of gods (Scott Aukerman, Patton Oswalt, Chris Hardwick, and Dana Gould) try to mess with the Doyles while they’re on safari, and it doesn’t go well.

Laserbeam stars John DiMaggio (Futurama, Adventure Time) as ApexCity’s resident superhero who boasts the power of one hundred lasers.  The early installments stick to a formula, but it’s a really funny formula.  DiMaggio’s performance is typically great, landing somewhere between Bender and Adam West.  I picked this one because, not only does it have Craig Cackowski as Patrick (the funniest Adventurekateer), but it also boasts Danny Pudi as The Platonic Ideal and Alison Brie as villainess Lady Haiku.  Those are great guests!

Yeah, I’m cheating here, but I couldn’t pick a favorite.  Every year, they do a “Christmas on Mars” special episode with SparksNevada and his cast hosting wraparound segments and special seasonal installments of the other shows.  (Sometimes the holiday shows have guest writers joining the fun, too.)  These are must-listen episodes and they offer a great taste of the scope of the show.

Episode 52 has a Beyond Belief with Frank and Sadie vs. the Grinch, Jumbo the Elephant (Mark Gagliardi) saves Christmas, and my favorite Moonshine Holler ever, which has James Urbaniak as an evil singing landlord and Alison Brie as the woman who can’t pay the rent.  Amazing.

In Episode 98, you get a Captain Laserbeam in which Anti-Claus makes everybody forget Christmas.  Autumn Reeser stars in Amelia Earhart, Fearless Flyer, an occasional segment that has Earhart fighting Nazis throughout time.  This one has a genius premise that combines the Beatles and the Maccabees.  And then Frank and Sadie Doyle live their own Christmas Carol with Colin Hanks, Emily Blunt, and Hal Lublin as the ghosts.

And in the most recent Christmas podcast episode, there’s an installment of the Sparks spinoff Tales of the United Solar System Alliance that features a Lizard Man (Keegan-Michael Key) who may ruin Space Christmas.  Philip Fathom gets his own solo adventure for the first time (more on him later).  And the Beyond Belief segment guest-stars Jon Hamm and Scott Aukerman, so you know it’s amazing.

Episode 70 – Sparks Nevada, Marshal on Mars – “The Piano Has Been Thinking” 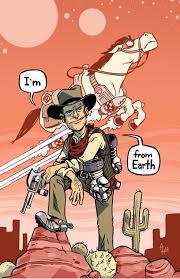 Yes, I know I advocated for starting Sparks at the beginning.  And yes, this is a fairly continuity-heavy episode.  But it’s also maybe by favorite TAH episode ever – it’s a musical that brings together the whole Sparks cast and it’s amazing.  The songs are funny and wonderful, and it’s just a great showcase for the cast.  (Special guest and national treasure J.K. Simmons holds the longest note I’ve ever heard in my life.)  I’ve listened to this episode over and over, and even if you don’t know why a saloon is in love with a Martian, you’ll enjoy it.  And then you’ll want to find out about that and then we can be Sparks buddies!

This is maybe my favorite Beyond Belief segment.  It involves a mysterious goat, the Chubacabra, a series of curses, enchanted apples, and true love.  It’s silly and complicated, and the Doyles are hilariously irritated to have this nonsense happening in their apartment.  I love it.  And the guest cast is fantastic – Matt Gourley as the Chupacabra, Natalie Morales as a Crone, and Gillian Jacobs as a goat.  It’s so good!

Episode 79 – The Adventures of Captain Laserbeam – “Tinker, Taylor, and Tyler Too”

I’m a sucker for Captain Laserbeam episodes.  Superheroes, be they genuine or comedic, delight me.  And this episode introduces the best character in the Laserbeam mythos – Philip Fathom, Deep Sea Detective.  It’s Hal Lublin going full Christian Bale on a character who’s basically aquatic Batman, and I love it so much.  I live for Philip Fathom appearances.  (NOTE:  This is not actually Fathom’s first episode, but in his previous appearance he was voiced by guest star Christopher Meloni.  And Meloni is great – don’t get me wrong.  But Lublin’s Fathom is vocal perfection.)

Colonel Tick-Tock is an agent of the Royal Chrono Patrol.  He and his Trick Clock travel through time holes to fix the paradoxes and temporal villains who threaten the time stream.  Craig Cackowski plays the Colonel who stands sentry over every century.  (Sorry – the Colonel Tick-Tock opening narration is impossible not to quote.  “He makes history happen…. on schedule.”)  I’m a big Doctor Who fan, so British people traveling through time is a subject near and dear to my heart.  I picked this episode because it introduces the Algonguin Four.  Peter Benchley, Woodrow Wilson, Harry Houdini, and Dorothy Parker end up with the powers of the Fantastic Four, and it’s as great as it sounds.  Annie Savage’s Dorothy Parker is a special favorite – “Dorothy Parker smash!”  Throw in Paul F. Tompkins as Julius Caesar, and you’ve got magic. 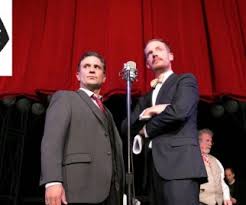 venues other than their usual stomping grounds at Largo.  As such, it’s a great place to get the feel for the current Sparks Nevada state of affairs.  It’s a funny story about the self-declared Emperor of Mars, a reluctant sheriff, and a Martian figuring out sarcasm.  It’s a really fun episode and you get to hear Marc Evan Jackson and Mark Gagliardi at their best.  And for added value, they released four versions of the performance with different guest casts at different venues.  I’m partial to Variant A, which features Dave Foley, Keegan-Michael Key, and Karen Gillan, but the other recordings have people like Jorge Garcia, Scott Adsit, and Welcome to Night Vale‘s Cecil Baldwin, so you really can’t go wrong.

So there you have it – ten episodes to introduce you to Thrilling Adventure Hour.  Well, twelve.  Check it out and become a fan as soon as possible.  We’ll have so much more to talk about that way!

One Response to Podcast Primer – The Thrilling Adventure Hour