Survivor, Season 31, Episode 10: “Like Selling Your Soul To The Devil, My Wheels Are Spinning” 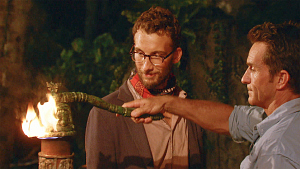 Seems like it’s always been a Thanksgiving tradition that the Wednesday-before-Thanksgiving, Survivor would look like a new episode via the commercials, but then would be a best-of type show. Not this year! And we didn’t get a mere hour – we got two, jaw dropping hours. And for that, I was thankful.

To put it simply – shit went down.

Bam! Ciera is gone. Bam, bam! Fishbach is gone. And for the first time, I have to start givin’ some folks some credit. Both of them were blindsided and both votes blindsided me.

I shouldn’t have watched two hours of Survivor and then went out to see the final movie in the Hunger Games series, because I’m left slightly confused. Like, did Jeff Probst release the mutts to kill Survivors? Or did Catniss lose an Immunity Challenge. Either way, I think the producers at CBS got an advance screening of The Hunger Games because they are pulling some huge mind-blowing moves like we’ve never see.

Will tonight be the night everyone wakes up and turns on Jeremy?

Kelley found a clue, randomly, to a Hidden Immunity Idol and then found it at camp on the underside of the shelter. And told no one. She’s got some major power.

Speaking of camp. How about that night new camp, eh? This is the Hunger Games shit, right here. When they told everyone right before the second Immunity Challenge they would have a white ball and black ball and if they held the black ball in their hands when asked to reveal, they’d compete for Immunity. If they held the white ball, they’d be helping the whole tribe and CBS crews would build and repair their shelter which, up until that moment, wasn’t protecting them from the torrential rains and harsh weather conditions.

Messin’ with their minds, man!!!

I wish there was an option to play along at home, because I could’ve told you Joe was going to choose compete and not better-shelter . . . he knows the minute he goes to Tribal Council without immunity, he’s going home. Period. It’s that simple. He’s got allies that try to pretend, oh, Joe, I’ll never vote for you (and maaaaaybe Spencer is being honest …lord knows he’s never made the right alliances or any alliances), but everyone is lying.

In the battle of Joe verses Hillbilly Keith, well, CBS tried to do some clever editing but it wasn’t close. An old man is not beating Joe.

Side note: I would give anything to see Keith as a contestant 15 years ago when he was a younger man. He’d win.

If I can end the rapid fire play by play, I basically summarized everything to get to my point – the game is getting really, really good. Like, epic-level season type stuff. Based on these last Wednesday, everything and everyone is on the move, including my Power Rankings. Yes. Despite the fact Jeremy and Kelley have Hidden Immunity Idols they’re keeping a secret from everyone, I think Hillbilly Keith and Tasha are playing such a good, non-threatening social game that they’ve become my front-runners. Here’s my list, and then I’ll explain.

People like Jeremy, personally, but now that Fishbach is gone, so too is his perfect little three-person bully alliance. He used an Idol to save Fishbach. He kinda betrayed Kimmi in doing so. He’s suddenly a man without a country and his age is showing. He’s not as strong as his well sculpted physique would indicate and the smarter players (Tasha, Keith, Kelley) are going to realize, hey, he was playing me for a fool. Abi is going to be angry with him. And Joe …well, Joe won’t really think about it. His only strategy is to keep winning and saving himself. If Joe was being strategic, he’d solidify his alliance with Spencer, the perennial odd-man-out, and say, “me and you, all the way,” and they’d, together, romance Kelley to be with them. The three of them would be so unlikely, they could keep their alliances (for the most part) and start picking people off. In fact, they’d only need to make it through tonight, use Kelley’s Hidden Immunity next week, and then make sure the two others (because we’d be in a top-5) didn’t win immunity. It’s never a guarantee, but that’s the smart move for Joe (and Spencer).

But the wrinkle, tonight, is that someone gets severely injured during a Challenge. I slowed down the video last week during previews of tonight, and judging by the color, looks like it might be Keith (but I’m not changing my list/power ranking above). That said, I’ll say this – if Keith leaves the game tonight because of blunt force trauma to the head, I included an asterisk on the list. If he does not get injurliminated (injury + eliminated), he’s going to win.

Thanks, CBS, for “game making” and pushing and twisting the rules and standard game play. Keep your Exile Islands and Redemption Island and dream up more stuff like this that challenges contestants life philosophies and views of society. Keep your Nerds v. Hot Chicks concept. This game, Survivor, will be most compelling when you make it look like a debate between Communists, Capitalists, Libertarians, Democrats, Republicans, and various other philosophies. It reminds me of an essay I once read that was titled, “Who You Are Is Where You Were When” that spoke to the fact we can’t ever see eye to eye or ever fully agree. And we shouldn’t. To get political, for a moment, it’s why I can never understand the idea of “straight ticket” voting and can’t understand why so many people silo themselves and watch only the news they find agreeable and read only the stories from the sources that already fit with their world-view.

This season, Survivor is challenging itself. It’s less about, hey, a gay guy. That’ll shock some people. And, oh, how about a minority and how about a very old bigot. Wouldn’t that be intetresting? No. Actually, those surface traits never made for the compelling drama and stories. Being gay or being brainy or being a former NFL or MLB star never captured our attention. Instead, it was the ego. It was the clash of people operating at various levels of happiness and self-awareness, while trying to balance that they were discovering about others. In fact, I would love to see a season of contestants who didn’t nominate themselves, but instead were campaigned for by friends and peers. Like, yes, I’d like to be on the show, but I know a half-dozen other people with fascinating personalities who aren’t mega-fans of the show who I’d like to see thrown into this social experiment.

Sorry for the tangent. Back to my point. This season’s Survivor is different, and I love it.

I hope I’m wrong about Keith being injurliminated. I hope I’m right about Jeremy being the next to go. I kinda hope Abi goes crazy tonight. And I really want Joe to win.

Thanks for reading. Talk to you on Twitter tonight and in the next few days in my next recap.