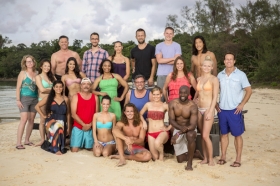 Here are the top-5 things I was excited about on this seasons of Survivor:

And here we are and everything on my Survivor-Christmas wish-list is falling apart. Everything. Including Wish #6 where I was hoping Abi would quickly get voted out.

The only thing I’m happy about is that Joe should easily make it to the merge and Kelley (The Blonde) found a Hidden Immunity Idol and found it early and nobody knows. Will she keep it a secret? Because she should for as long as she can and then, if ever she needs to reveal she has it, she can pretend she found it just before the moment she reveals it.

See that folks – that’s serious game-play analysis. If you ever go on Survivor, you had better mention you learned everything you know about playing the game from spunkybean.

At least we got to see a little bit o’ Joe. Making hammocks. Catching fish. Being handsome. Stuff like that. When I see Joe play Survivor, it makes me wish they’d put together a cast of “super Survivors”. And I don’t mean people who are “all stars” and succeeded on past seasons because of their social game. I want an cast full of past cast members who all won 3 or more challenges. Who can all start fire and bench press 200 pounds. Is that impressive? 200 pounds. I don’t actually know because, um, I can bench sooooooo much more than that.

Are you reading that, CBS? Not “all stars”, but “super men” and “super women.” It would be a good season. One thing that’d be interesting is that rarely have the most gifted physical specimens been the best strategists and most times they don’t win because they are seen as a threat in the final 6 or final 5 and everyone conspires against the physical threats so they stop winning physical challenges.

But most of last night was focused on the Angry-Latino (aka Abi), labeled the “One Woman Brazilian Soap Opera” by Varner, and that sums it up perfectly. Last week she was missing her bracelet and went berzerk and made enemies and then this week, rather than simply listen to her enemies talk about her, she confronted them and made more enemies. But then the strangest thing happened (and when I say “strangest” I’m actually being sarcastic. She was hurt and vulnerable and honest and, oh, look …she became likeable and Terry (who would be on my Super Star cast) befriended her while Shirin and the Asian bullied and laughed at her.

And what’s the saying? He who laughs loudest has the last laugh? Something like that.

Anyway, because Abi was made to be such an outcast, and it went beyond simply not-liking her, and when Super-Terry saw the bullying going on, he went and created an honest to goodness ally in Abi. So that made the alliance Abi, Varner, and Terry on one and Shiri, Spencer (The Nerdy Guy), and the Asian (aka Peih) as a little alliance on the other side. But boy oh boy did Peih (The Asian) flip in a hurry when she recognized nobody was on Shirin or Spencer’s side and that pretty much was the end of those two. Oh, and Spencer-the-Nerd and Shirin single-handedly lost the challenge for their tribe.

So when you think you’re running the show and don’t work to make friends and influence people, and you show that you don’t add much value in physical challenges, um, well, pack your bags.

In just two weeks, I’m already in love with this season and now I get to watch Spencer get back into his panic and paranoid mode and maybe Joe will be featured more. Just as long as Joe and The Hillbilly make it to the merge.

Thanks for reading. Leave some comments. Let’s make our own tribe. Blog atcha next week.